Should I Use the Autorouter in PCB Design?

Should You Use the Autorouter in PCB Design? 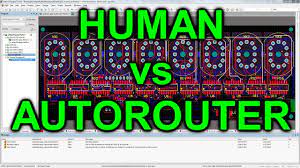 We’ve been promised AI/neural-network based autorouter engines since the second half of the 1990s, but thus far it’s never delivered on the promise. There are some autorouter engines in other products that sound more promising, leveraging modern AI tech, but are not yet ready for the job. Ultimately, one day, there probably will be a PCB autorouter that out-performs even an experienced PCB designer, but we’re not there yet.

The challenge for an autorouter comes in several parts:

What Altium has been putting heaps of development effort into lately is the ‘ActiveRoute’ feature, whereby you select a bunch of tracks - say, a memory bus - and then lay out a path of suitable width, and you the designer lay out the overall path that bus should take, and the ActiveRoute engine then goes and lays out all the tracks, up to the point of bringing them close to their target end-points. You get to lay out that path with your ‘knows the big picture’ human brain that has most if not all of the whole design requirements in your head, even if it’s not captured in design-rules, and dramatically cut down on manual routing time. For the time it takes to route 1 or 2 signals, you can do 10, 20, 30, all at once. That’s a great use of semi-auto router technology.

911EDA PCB Designers do not use any software's autorouter, ever.